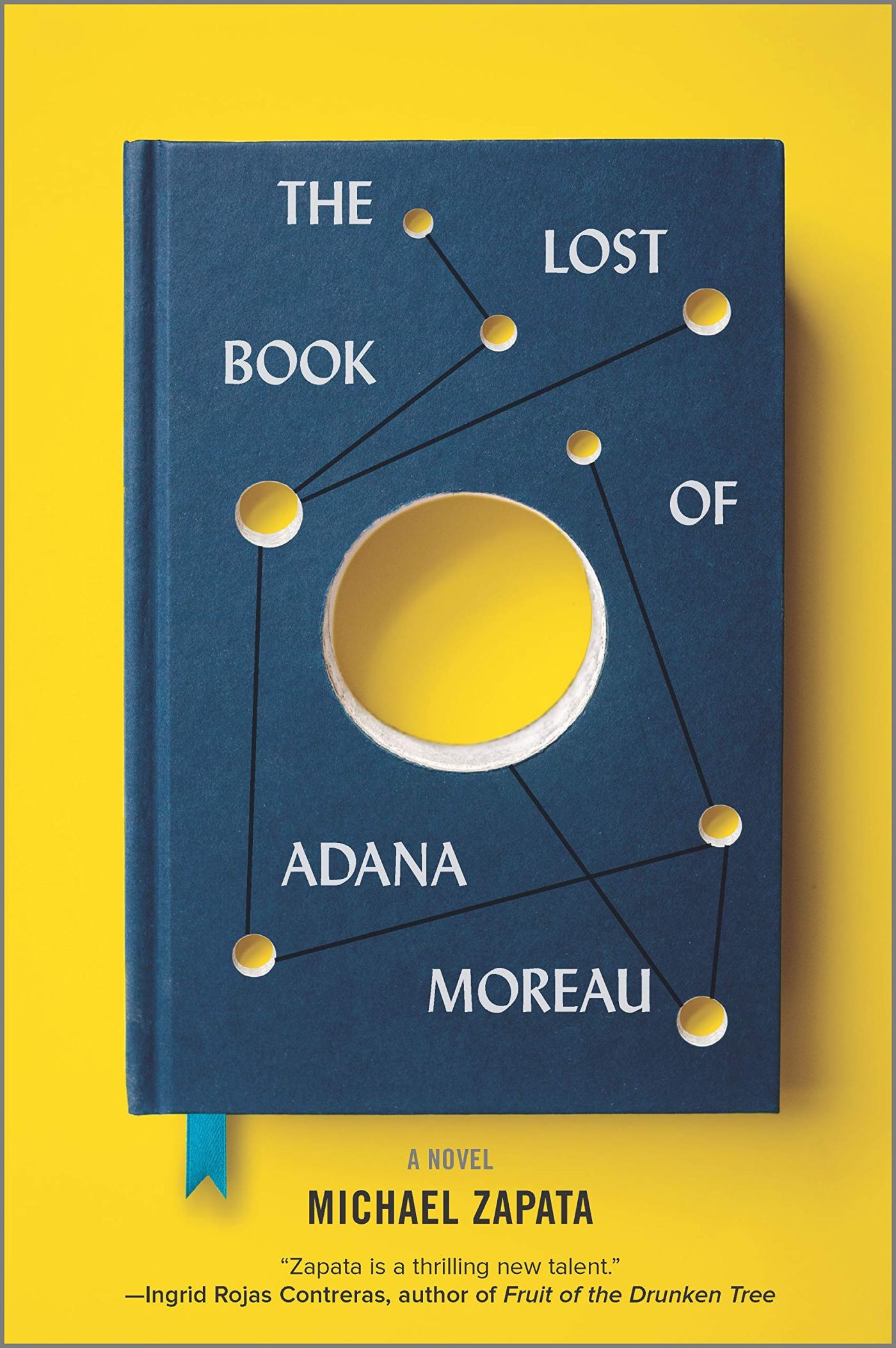 About one year ago, The Lost Book of Adana Moreau by Michael Zapata was just about to come out when I discovered it. I was immediately interested in reading this debut, especially when I saw comparisons to Carlos Ruiz Zafón’s The Shadow of the Wind. I do love books about books! Although I did buy The Lost Book of Adana Moreau last year, I decided to wait until after I’d reread The Shadow of the Wind and finished its three sequels. Now, as I plunge into a month of reading Latinx fiction, it felt like the perfect time to dive in.

In 1929 in New Orleans, a Dominican immigrant named Adana Moreau writes a science fiction novel. The novel earns rave reviews, and Adana begins a sequel. Then she falls gravely ill. Just before she dies, she destroys the only copy of the manuscript.

Decades later in Chicago, Saul Drower is cleaning out his dead grandfather’s home when he discovers a mysterious manuscript written by none other than Adana Moreau. With the help of his friend Javier, Saul tracks down an address for Adana’s son in New Orleans, but as Hurricane Katrina strikes they must head to the storm-ravaged city for answers.

What results is a brilliantly layered masterpiece—an ode to home, storytelling and the possibility of parallel worlds.

Despite my initial excitement to read The Lost Book of Adana Moreau, I have to admit, it wasn’t quite the right book for me. There was a lot I did like about it, but several elements I didn’t enjoy ultimately brought my rating down.

From the first chapter, The Lost Book of Adana Moreau has a vague, dreamlike writing style. It’s not particularly involved in the characters’ inner lives. Instead, it feels like events are happening behind a thin veil of fog. Perhaps it’s a nod to old-school magical realism. Alas, I’m not very familiar with that genre, so I couldn’t say for sure. In any case, while I somewhat enjoyed the writing style at first, it eventually made me feel too disconnected from the story.

I was surprised that, despite being the titular character, Adana Moreau has hardly any on-page presence. More than being a fully fleshed out character, she’s an unwitting instigator for later events. I wish we’d gotten to know her more, but the author behind the lost manuscript wasn’t really the point of this book.

This actually leads to my next (and biggest) complaint with The Lost Book of Adana Moreau: It has so many random tangents that the main story gets lost. The primary plot takes up maybe half of this book (and at only 272 pages, it’s not long by any means). But the rest of the book wanders into numerous side stories that don’t seem all that relevant to the main events.

The main plot follows Adana’s young son Maxwell around the United States in search of his father; decades later, a man named Saul is searching for Maxwell (now an old man) to deliver a long-lost book inherited from Saul’s grandfather. That’s already two storylines, and both are interesting enough to fill a novel. However, we also get tangents about a friend’s work in Argentina, covering political turmoil there. Later, we learn all about Saul’s great-grandfather’s (also named Saul, as it turns out) and his escape from the city of Vitebsk due to “political trouble” he’d gotten into. Especially with this latter side story, it was detailed and intriguing enough to be its own full-length novel. Instead, sandwiched within The Lost Book of Adana Moreau, it felt like diversion that was perhaps shinier than the main event.

With all of these long tangents, that the plot was lost, and the meandering offshoots never really coalesced into anything concrete. Michael Zapata tried to do too much with this book, and it unfortunately diminished the overall novel. There were too many characters, events, settings, and themes. This novel would have greatly benefited from narrowing it down some more. I actually wish these different ideas – rich as they were – had been saved for future novels. Alternately, these could have all been a collection of short stories. As it is, The Lost Book of Adana Moreau felt muddled.

By the end of The Lost Book of Adana Moreau, I realized that more than enjoying the book itself, I liked the idea of it. A lot of the themes, pieces of history, and characters were interesting, but none had enough focus to drive home their full potential.

As a debut novel, perhaps the author had too many ideas and too much ambition? Maybe he wanted to showcase more of himself than one novel could hold? My hope is that his future books will prove stronger and more focused. Michael Zapata has great command of language, he’s knowledgeable about many topics, and he has plenty of imagination. We’ll see if his next books harness that a bit better.

Although The Lost Book of Adana Moreau wasn’t fully to my taste, I did still enjoy a lot about it. There’s too much going on here, but the ideas and diverse knowledge are there. I look forward to reading more from Michael Zapata in the future, and with any luck, I’ll enjoy them much more. 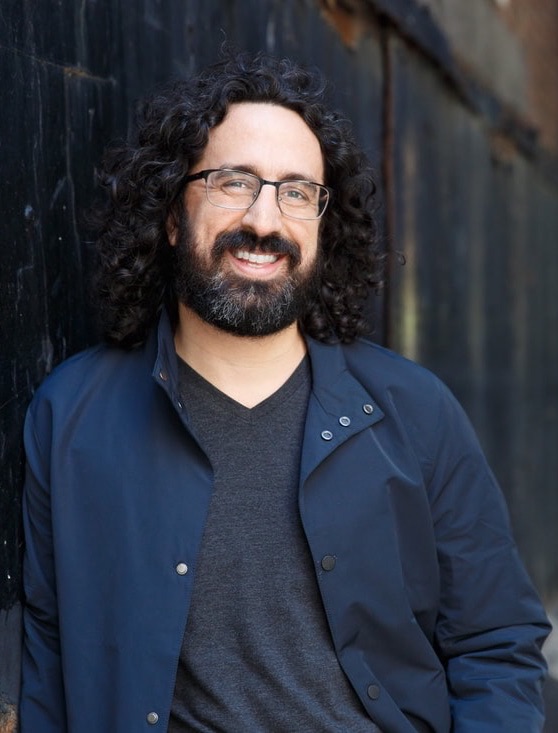 Michael Zapata is a founding editor of MAKE Literary Magazine and the author of the novel The Lost Book of Adana Moreau, winner of the 2020 Chicago Review of Books Award for Fiction, finalist for the 2020 Heartland Booksellers Award in Fiction, and a Best Book of the Year for NPR, the A.V. Club, Los Angeles Public Library, and BookPage, among others. He is the recipient of an Illinois Arts Council Award for Fiction and the City of Chicago DCASE Individual Artist Program Award. He is on the core faulty of StoryStudio Chicago and the MFA faculty of Northwestern University. As a public-school educator, he taught literature and writing in high schools servicing drop out students. He currently lives in Chicago with his family.

The Ten Thousand Doors of January

It was fall 2019 when I first heard about The Ten Thousand Doors of January, the debut novel by Alix E. Harrow. It hadn’t been… END_OF_DOCUMENT_TOKEN_TO_BE_REPLACED

The Shadow of the Wind

I first read Carlos Ruiz Zafón‘s The Shadow of the Wind four years ago. At the time, it felt like one of the most magical,… END_OF_DOCUMENT_TOKEN_TO_BE_REPLACED

The Library of Legends

I’ve devoted the past couple of weeks to reading Asian fantasies. Following Song of the Crimson Flower and The Night Tiger, my trilogy ends with… END_OF_DOCUMENT_TOKEN_TO_BE_REPLACED

I love it when a book not only meets your excited expectations, but actually exceeds them. That’s what happened with Emily Henry’s Beach Read, a… END_OF_DOCUMENT_TOKEN_TO_BE_REPLACED

I’m a sucker for a good haunted house story. While I’m a fan of horror movies in general, my favorites are always set in spooky… END_OF_DOCUMENT_TOKEN_TO_BE_REPLACED

The Girl Who Reads on the Métro

I first came across Christine Féret-Fleury’s The Girl Who Reads on the Métro while exploring a nearby Barnes & Noble. It instantly captured my imagination… END_OF_DOCUMENT_TOKEN_TO_BE_REPLACED 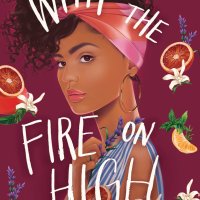 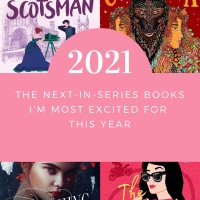 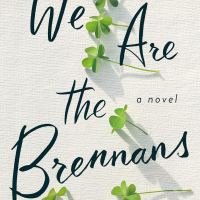 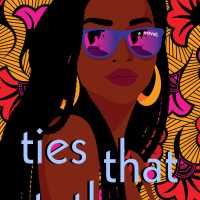