Since I was in middle school, I’ve been a big fan of horror and thriller movies. But, shockingly, I haven’t read many books of those genres. I loved Nancy Drew mysteries as a kid, but my adult reading has been sadly lacking in all things horror and thriller. So with this new void to fill, I ended up in front of three books by Ruth Ware. It was hard to choose between them, but I finally decided to start with The Woman in Cabin 10, her second novel – and what a thrilling ride it was.

The Woman in Cabin 10 opens with a bang when Lo Blacklock is attacked in her own apartment. Already, this is a fast-paced page turner bidding you to read just one more chapter. This early scene also shapes Lo’s character and reliability as a narrator. In part due to her own pre-existing vices, and in part due to the trauma caused by the burglar, Lo spends much of the book sleep-deprived and inebriated, meaning readers can’t fully trust what Lo thinks she see or hears. Or can we?

Lo Blacklock, a travel journalist, embarks on a once-in-a-lifetime opportunity to enjoy a luxurious, 10-cabin cruise with a cast of high-class characters. Early on she meets a woman in the cabin next to hers, but she doesn’t see her again as the upscale meals and parties commence. All goes smoothly until Lo hears someone fall overboard in the middle of the night. But did that really happen, or was Lo’s imagination getting the best of her?

From here on, The Woman in Cabin 10 races ahead, with each glamorous guest and crew member growing more suspect as the clues and warnings keep adding up.

The characters are as rich as they are diverse. Each person Lo meets has a distinct personality, as well as a distinctly suspicious vibe that makes Lo question everything they say. Are these people odd but harmless, or is one of them a cold-blooded killer?

In addition to the cast, the setting of The Woman in Cabin 10 adds tension and mystique. Ruth Ware vividly describes the cold, calm North Sea and the extravagant Aurora cruise ship. But the flip side of a relaxing vacation cruise is the sense of just how trapped everyone on the boat is. Lo is stuck on this ship with a murderer, and her only escape would be certain death in an ice-cold sea. The very setting of the novel adds urgency and terror.

Another element that enhances The Woman in Cabin 10 is the previews from the future at the end of each part. (The novel is divided into 8 parts.) Emails, forum chats, newspaper articles, and more give hints of all the scary things to come, making the read even more thrilling and nerve-wracking.

Events and suspects grow up until a shocking twist in part 6 and another twist towards the very end of the book. For all the suspicions and hunches you’ll develop throughout the book, nothing will prepare your for the surprises The Woman in Cabin 10 holds. The story continuously shifts and turns, leaving you guessing – and rapidly reading – until the last page.

The book ends with everything wrapped up and satisfyingly explained, but look out for one final shock on the last page. While some books (and movies) of this genre can falter on a lackluster wrap-up, this one offers a perfect ending with closure and just enough intrigue to keep the imagination working.

The Woman in Cabin 10 is an excellent psychological thriller, and you’ll love that Lo is such an unreliable narrator. The book offers mystery and suspense, but with enough action to keep it exciting. It will be one of your favorite novels of the year, and you’ll certainly want to dive into Ruth Ware’s other two books next! 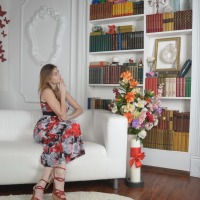